Denio’s- 75 Years in the Making

We are SO EXCITED to announce the release of our documentary feature film, “Denio’s- 75 Years in the Making.” Take a walk down memory lane and learn about one of Roseville’s most prominent families and how they created Denio’s Farmers Market & Swap Meet. Hear interviews from the Denio family, check out old photos, videos and more!
Directed by Elyjah Wilbur of Elyjah Wilbur Video, join us for the VIRTUAL premiere on Thursday, February 9th at 12pm on YouTube! Head to the Denio’s YouTube page or scan the QR code on the invitation and reserve your spot today! We can’t for you to watch! 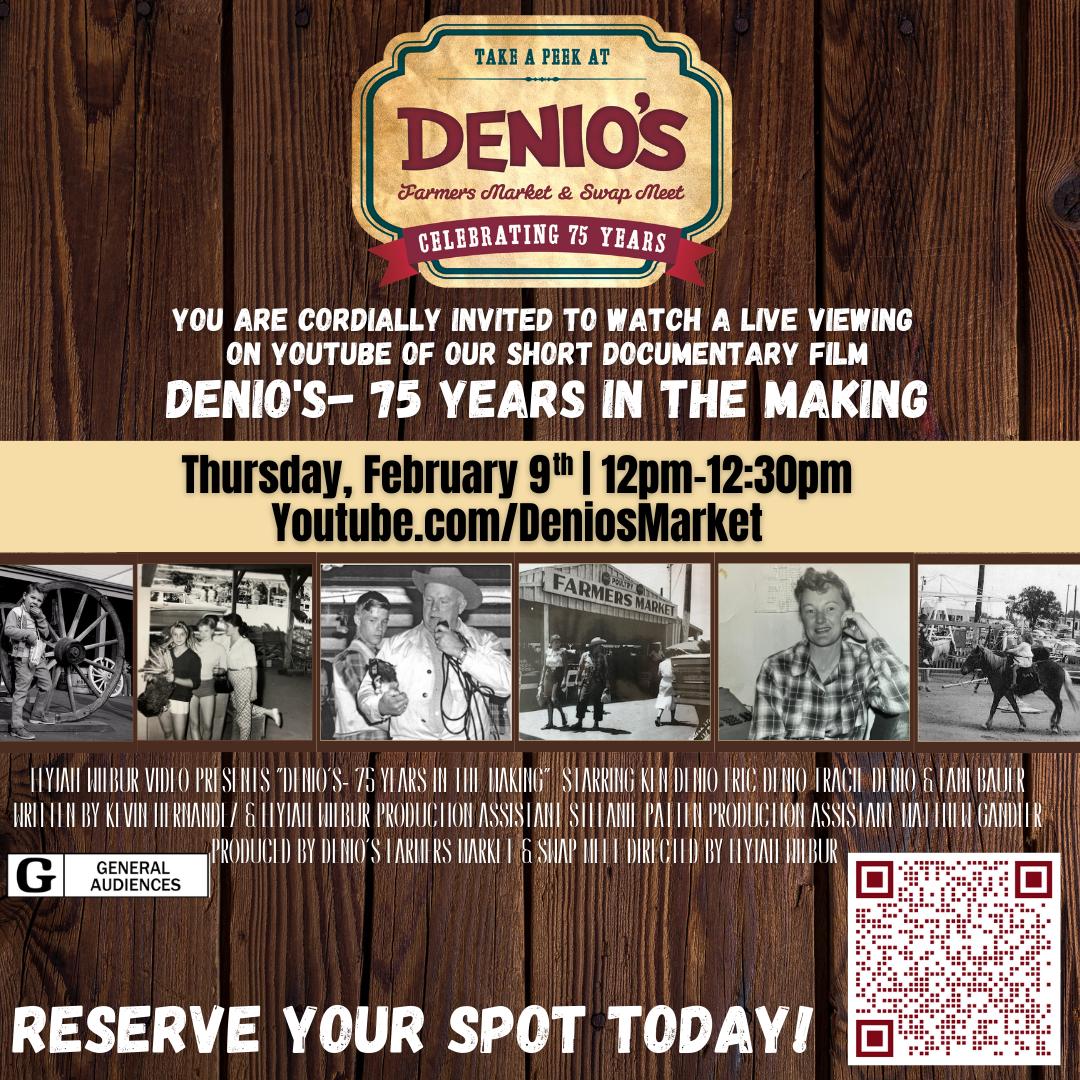 We have some AMAZING vendors at Denio’s and any time we get an opportunity to showcase them we are thrilled! Check out some of our produce, food and swap meet vendors who have been featured on our local news stations! To check out our entire library of videos, subscribe to our Youtube channel today!

The 2022 State of the City Address was delivered on August 26th, 2022 by Mayor Krista Bernasconi at West Park High School.

Roseville residents, representatives from our boards and commissions, leaders in business, education, nonprofits and students gathered to hear about the impact that our Roseville City has on the region.

Denio’s Farmers Market was excited to be included in this year’s State of the City as one of the many regional destination locations in Placer County!

This picture features some of the people who oversee the fun in our city and make sure that there is plenty to eat, drink and see! CLICK HERE for the complete recap on the 2022 State of the City and to also find out the top 10 reasons why Roseville is the best place to live, work and do business in! Remember #WeAreRoseville Have you subscribed to our YouTube channel yet? If not, then WHAT ARE YOU WAITING FOR??!!

There’s even some old commercials, featuring our famous jingle! Do you remember the words?

Don’t be the last to know what’s new at Denio’s! Subscribe TODAY! Denio’s Farmers Market is so excited to win “Best Day Trip” in The Roseville Press Tribune’s annual Best Of The Best 2022! Thank you to the readers and viewers of The Press Tribune for voting for us! For a complete list of winners CLICK HERE! Collaboration Brew Day! Denio’s Farmers Market & Swap Meet is turning 75 this year!  To help us celebrate this HUGE milestone, The Monk’s Cellar Brewery & Pub House has brewed an older style American lager that would have been around back in the 1940’s. Monk’s owners Andy Klein and Paul Gould are both from Roseville and operate as a family owned business. Andy and Paul have been friends since childhood and grew up coming to Denio’s as BOTH of their mothers operated a business in our market for several years! At one point, Andy and Paul even worked at Denio’s!
Denio’s is SO EXCITED about this partnership with Monk’s Cellar and cannot wait for you to try the new beer!Be on the look out for “Big Jim Denio American Lager” in 16oz cans and on draft near the end of March at both Denio’s Farmers Market AND The Monk’s Cellar! Cheers! Eric Denio adding the hops to the beer batch Two generations of the Denio family and their management team. The unveiling of the “Big Jim Denio” beer label! Jim’s granddaughter, Tracie Denio is so excited to share this with everyone! Thank you to the AMAZING team at Monk’s Cellar for making this happen! We are so grateful!